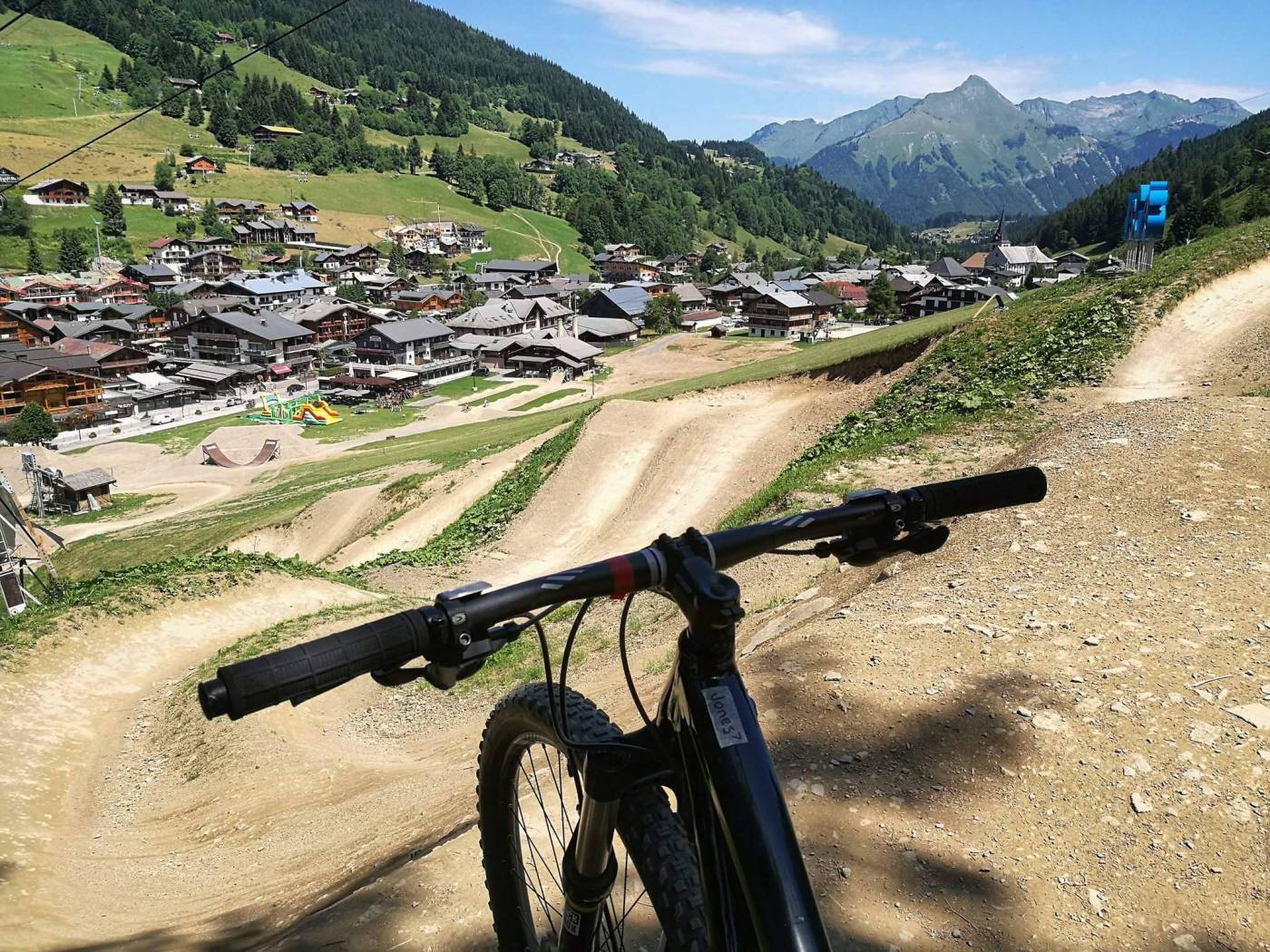 We were turning the big 30 and wanted to do something special. We knew that we had to celebrate in style so there was only one thing for it, a biking holiday!
Morzine is a mountain bikers paradise in the heart Portes du Soleil in the French Alps, close to the border of Switzerland. In winter this is a skiing resort but it completely transforms during the Summer months with many trails/bike parks and all varying in difficulty. Avoriaz and Les Gets are also on Morzine’s doorstep, so we had loads to look forward to. Steep, rooty and technical single track with our name on it, jumps, pump tracks and fast open downhill we only dreamt of. I had fallen in love with the trails in the UK but this was set to be my first taste of real mountain biking and to say I was excited would be an understatement. 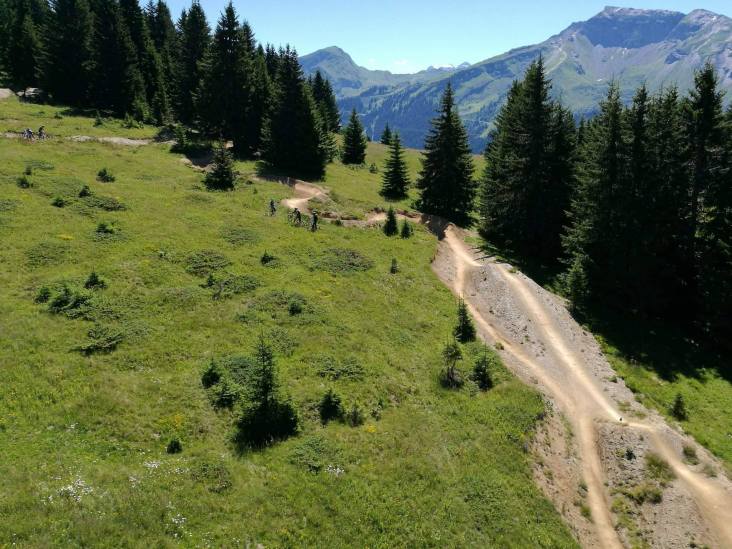 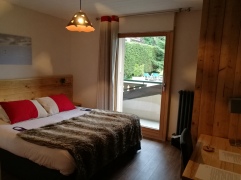 We flew into Geneva airport just over an hour away from Morzine but there were lots of people who chose to drive, it can be broken up nicely into a 2-3 day trip as it’s only about 8 hours from Calais. Our base for the week was Hotel Hermine Blanche, just a short walk from town and more importantly the chair lifts. This has got to be one of my favourite hotels we have stayed in to date, nothing too snazzy, just nice, clean, up to date and well run with amazing views over the town and wooded slopes, not to mention the swing to sit on and admire the mountainous landscape. Everything we needed, complete with pool and sauna.

Not yet confident enough to fully plan and map out our trip or bring our own bikes we chose to book through Alpine Elements. We took this as an opportunity to hire bikes and upgraded to full suspension to make the most of our location with reps on hand to give advice about the trails. We were both armed with Specialised cambers, 29ers and we couldn’t wait to start shredding.

As we arrived there were a few people grumbling in the foyer about the bad weather as they waited for their airport transfers but luckily we struck gold and Sunday to Friday was bloody beautiful. It was also the first week of the season with all the chair lifts open… Buzzing!   The thing we needed to remember was that the grading is very generous in Morzine, in comparison to UK trails, some of the twists and turns that you get on the Blue trails aren’t too dissimilar to that of a Red trails in the UK. That said, there’s always chicken runs but where’s the fun in that! The lifts run from 9-5 and you can buy lift passes ad hoc, we planned to be getting as much riding in as possible so we got passes for the week and the deal’s pretty good. Putting your bike on the chair lift can be pretty daunting, there’s about three different methods on different lifts but once the friendly stewards have helped you put your bike on once or twice it’s pretty simple. 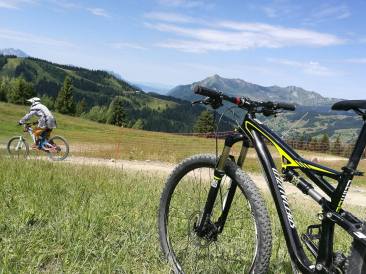 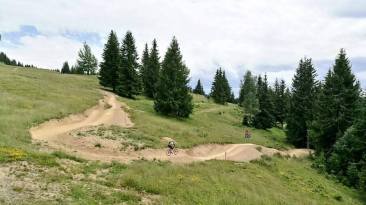 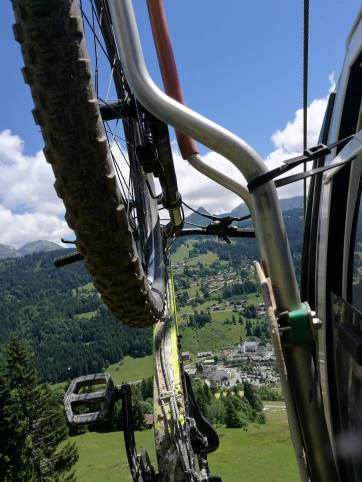 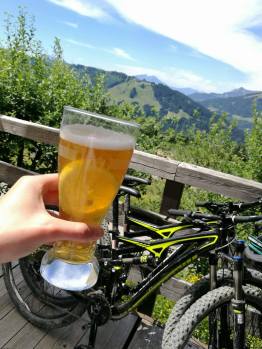 On Day 1 we were up bright and early for breakfast. We eased ourselves in and decided to start our biking adventure taking the Le Pleney to the blue route and headed down towards Les Gets. You can pick up speed really well, it’s a nice, fast, flowy trail and for us being of average ability, got the heart racing, putting a smile on our faces leaving us wanting more. Of course we had to do a cheeky selfie by the Les Gets sign! 🙂 There’s also a great pump track with big jumps and smaller jumps down the foot of the trail too. It was great to give us a bit of practice and we could have stayed all day just watching the more experienced riders as they were getting some serious air!

Then feeling fit and confident after a nice pit stop we decided to go for some enduro, this took us over to the Chavannes Express and we headed to Les Chavannes. Hitting a restaurant at the top sipped a nice cool glass of La Blanche from Brasserie Du Mont Blanc while admiring the view of… Mont Blanc! This was a light, citrusy beer, the perfect biking beer! It was heaven and only the first day. Then for the best bit, our decent down the trail enjoying the speed and scenery cutting through fields where we stopped to say ‘hello’ to the local friendly cows. It was then time for another beer, we stopped by a bar Le Cottage. A great atmosphere and wicked biking environment right at the foot of the mountain and serving up some familiar, great tasting Fourpure beer. Flat Iron American Red and Session IPA were our beers of choice. Heading back to the hotel, the pool was definitely on the cards after going all out on the first day! 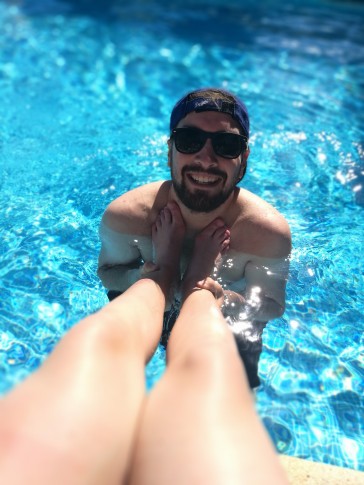 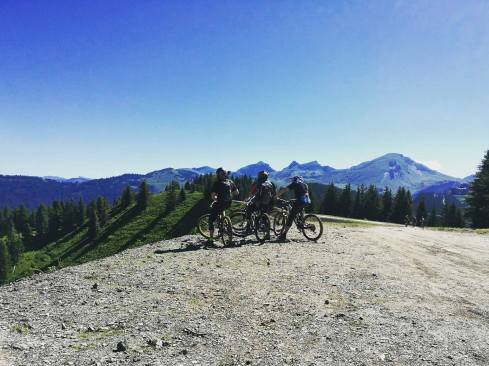 Not really sure what trails we were capable of and wanting to get a bit more familiar with the area at the beginning of the week we joined a guided bike tour which was included in our package with Alpine Elements. Along with the group we headed up the Super Morzine lift, hitting a few Blue and Green trails. There was a mixture of abilities in the group from beginners to experienced mountain bikers which made for a very fun ride, especially when we started heading towards Avoriaz and our guide took us of piste, cutting though the bushes onto some secret trails requiring some technical ability to conquer the natural tracks, roots and random logs. We then joined a steep windy road section which was very fast and a bit nerve-racking around the sharp bends passing through Les Lindarets, a small village which is home to 50-ish goats that roam free and will eat anything! Following the guide, we got back onto the dirt track and Port du Soleil route arriving at the beautiful alpine Lake Montriond. Absolutely stunning views, the peacefulness of the lake left us in awe as we just stopped and gazed for a while mesmerised by the reflections of the mountains in the lake. It was only coming up to lunch time and we had already had jam packed day and we were tired. All so worth it but we still had a short 20 min ride back to town and for me Paragliding in the afternoon! 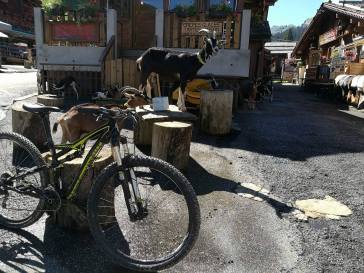 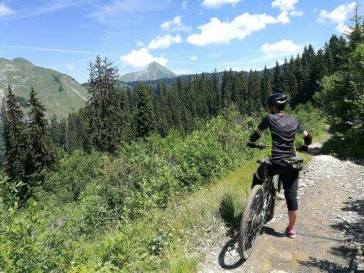 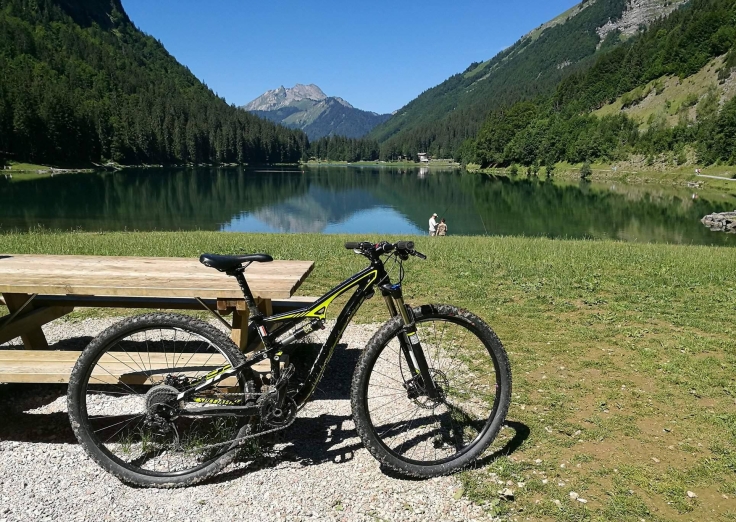 After lunch and a beer I had time to realise what I was about to do, Jump off the side of that mountain with a parachute attached to my back and my life in the hands of a stranger. This was the day I was to complete one of the things on the bucket list but now this was a reality and I was doing this alone as the hubby had refused to come along for the ride and even said I was crazy. My heart began to race as we drove up the mountain to the jump spot and I grew absolutely petrified but at the same time the adrenaline was kicking in and I was excited. What a way to be turning 30. The guide set out the parachute on the side of the cliff, attached it to me and me to him, before I knew it we were running as fast as my legs could carry us and we had take off. My mind was blown as we soared through the sky, in-between the mountains we circled above the trees and swooped down like a bird. This really was the best thing I had ever experienced, as we neared the ground and landing field still at speed we crashed to the floor. My legs wobbled and I struggled to get to my feet. The hubby got an amazing shot of me gliding above the chalets and back into Morzine, from the pub garden, beer in hand might I add but oh did he miss out. Bucket list tick number 1. 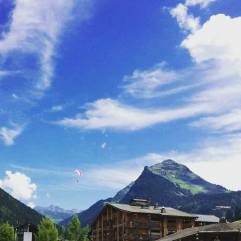 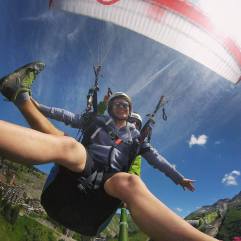 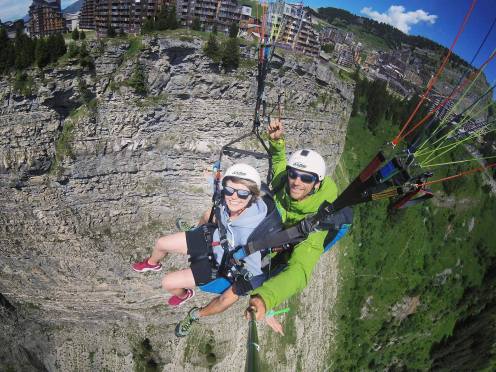 While I was up in the air Mr Beer Yeti had booked us for dinner at the local brewery, Le Bec Jaune. The boy done good, after the day I had it was amazing to spend the evening sipping on some real beer and not the standard lager served back at the hotel. With all the beer brewed in house at the small micro brewery we jumped at tasting all three beers they had on tap, it was the IPA that won hands down and it had to be a pitcher for us. A refreshing beer, quite malty with a lovely hoppy finish. It wasn’t only the beer that was great but also the food, recently making the change to a dairy-free diet I was delighted with the range of food on the Vegan menu. I was in heaven when they brought out the BBQ Pulled Aubergine Burger, got to be the best burger I have ever had, ever! This was the perfect end to day in the mountains, good shout from Mr Beer Yeti check out his review here! 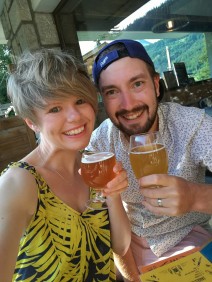 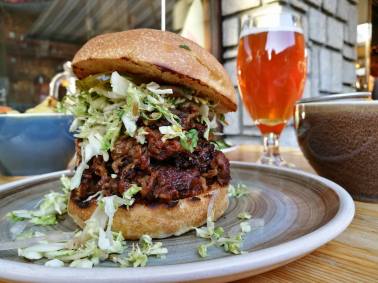 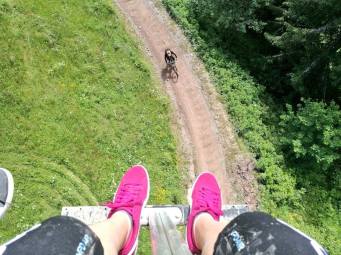 Later in the week we returned to Le Pleney, just the two of us and started back on the Blue trail picking up our speed and getting to grips with the technical sections. We were in our element so decided to try some of the Red which was awesome but a bit out of our comfort zone, we decided without full face helmets or goggles we were risking it and put this on hold… until next year! We then returned to Les Chavannes heading back on the trails, at the top we were rewarded a great panoramic view of Mount Blanc and an awesome beer from Cimes, perfectly named “Yeti” … but at 8.0% we only had the one and we were flying back down the trail with a new found confidence… goodtimes! 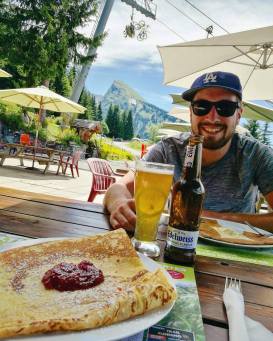 The days passed too quickly and we were having the time of our lives. Riding the best trails, eating great food and drinking some lovely local beers we were in our element. Getting up early and waiting in the que for The Supermorzine lift was well worth it and by the end of the week we were riding faster than ever before. Fast flow trails and riding the berms feeling like pros. All this fun followed by a lovely fresh glass of Leffe in Avoriaz, went down a treat in the sunshine. We then hit some more trials that side of the hill. There were some pretty fast/ steep decline and the rooty sections we were now taking in our stride, Fun, Fun, Fun! 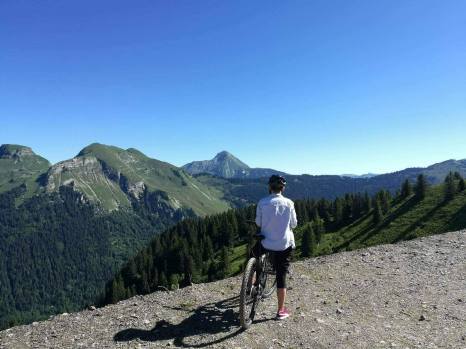 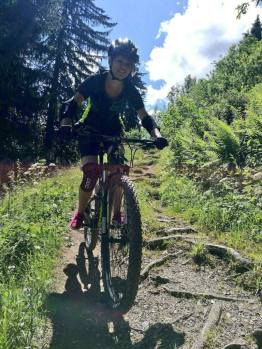 We had planned for the afternoon ride to pass by Lake Montriond, for a relaxing few hours by the water and some kayaking… not as brave as others, we didn’t go for a swim as the water was ICE COLD! But we enjoyed the lovely weather and views with a gentle paddle as our bodies we now feeling tired and destroyed from all the riding. We then followed the river back to the resort which was a very scenic, relaxing ride.

This was a great holiday and we had the best time we could have possible had, Alpine Elements were great in helping us organise our week and get the most out of the week. The biking boys offering their advice where needed and done a good job in keeping our bikes maintained and clean every day so all we had to worry about was what trail to shred next. We opted for a few of the activities included in our package including the biking guided tour, kayaking and rafting which were all great fun and also managed a day trip out to Lake Annecy. This was definitely an action packed week and one we will remember forever. The trails out in Morzine were something else and we have taken our riding to the next level and met some amazing people, the future is looking good.